What is the pelvic floor?

The pelvic floor is a group of muscles that sit in the lower pelvis. They aid in urination, defecation, and sexual function. They also help to support the pelvis, the hips, and the low back.

Describe some of the issues related to pelvic floor dysfunction.

Sometimes patients come to me with issues where their pelvic floor is weak. These patients may complain of urine leakage when they cough, laugh, sneeze, jump, or exercise. Some other people may have a more upregulated pelvic floor that’s overactive. Those people may be complaining of issues with pain. They may have pain in the pelvic region, pain with intercourse, or even pain with just sitting for too long, standing for too long, or any activity that they do throughout their day. My first goal with any patient is to make them feel comfortable. I know we’re going to be talking about things that may be a little embarrassing for them. But I always let them know that there are a lot of people who have these problems, and that’s a common misconception that they’re the only person dealing with this. I try to make sure that they know that they’re not alone and that I’m not embarrassed about what they’re talking about. I hear it all the time, and I’m here to help them. So, my first goal is always that my patient is comfortable, and that we’ve established a relationship of trust.

What is your approach to working with pelvic floor patients?

A lot of people will ask if they’re the only person that leaks when they cough or laugh, or they’ll also say that they think it’s normal because on TV there are a lot of commercials that have normalized incontinence. Some people will say, “I’ve had four kids. I just thought it was normal that I would have pain with intercourse, or that I would have leakage.” But that’s actually not true. We’re here to give them some more information and help them get their life back.

How do you work with patients who have pelvic floor issues?

The first thing I’ll do will be very similar for anybody that comes in. Because the pelvic floor muscles sit within the pelvis, I’m going to look at the alignment of their pelvis. I’m going to look at the alignment of their spine. I’m also going to look at the strength of their core, their hip girdle muscles, and then also how they breathe. There’s a close relationship between the pelvic floor and the muscles that you use to breathe. From there, I will also typically request that I do a pelvic exam. The reason for that is that the pelvic floor muscles are located within the pelvis, and that’s the best way for me to find out what’s going on with them. However, if the patient does not want me to perform an internal exam, that’s not a problem. I have other techniques that I can utilize as well.

What are some of the different treatment options for patients?

Usually I’m going to cater a program to the specific needs of the patient. Depending on what I found with their alignment, I may do some corrections to that, some soft tissue work or massage-type techniques to those muscles, or work on some strengthening. I may have the patient do exercises where they are coordinating their pelvic floor muscles with their core muscles with their breathing patterns.

There’s also something called biofeedback, which we can utilize. An electrode is inserted into the vagina or rectum, and then that gives a readout onto a computer as to what the muscles are doing. Then I can use that to help the patient either strengthen or learn how to relax those muscles.

Can you share some success stories you’ve had with your patients?

One of my favorite patients that I ever worked with was a 45-year-old man. He had had prostate surgery and was left severely incontinent. He was very active. He was a construction worker, so he had to climb up and down ladders and lift heavy materials. He was very embarrassed because he was going through eight to 10 incontinence pads a day. He had to carry a bag around with him. He was constantly taking breaks throughout his day, and the people that he worked with knew what was going on because he was constantly having to take breaks to change his pads. After we had worked together for a few months, he got to the point where he no longer really needed any incontinence pads. He could go up and down ladders. He could swing his hammer. He could carry big boards around, and he didn’t have any leakage. It really made a huge impact in his life, because he could go back to doing what he loved without the embarrassment of everybody knowing that he had incontinence.

Another one of my favorite patients was a young woman who had had a severe tear with the birth of her third child, and it left her in a lot of pain. She had a lot of scarring through the vaginal area and was unable to engage in intercourse with her husband, which was impacting her marriage. After working with me for a few weeks, she had gotten to the point where she no longer had pain and was sitting while she was nursing her child. She was able to be intimate with her husband again, and it also just really had a great impact on her relationship, her self-confidence, and in her life.

What do you enjoy most about what you do?

I love that I get the opportunity to make a difference in people’s lives. The issues that people come to me with are issues that they’re afraid to talk about. They’re things that they’re embarrassed about. They think they’re alone. To be a listening ear and to be a guiding voice to let them know that they’re not alone. They don’t have to live with these problems, and there are things that we can do. It is incredibly rewarding. To be able to impact their life on such a personal level makes it even that much more rewarding because you know that you’re not just taking away pain. You’re changing their life. 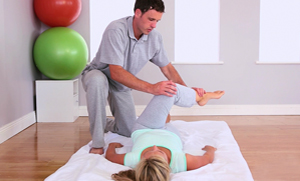 From immobility from breast surgery to lymphedema and incontinence, our team can help you get your life back on track.
Search The Memorial Network
COVID-19 Information