Heather Lazarides, MS, CCC-SLP, BCS-S, CKTP+, describes how she works with aphasia patients who need language therapy, especially after strokes or with progressive diseases like ALS.

At Memorial, we can do any kind of language therapy. After strokes, sometimes people lose their ability to communicate with others. Strokes can take away your communication skills which is a terrible thing to take away. We can work with people with language disorders and also can prescribe and help train communication devices for people to be able to communicate after strokes or with progressive diseases such as ALS.

Talk about how you work with patients who need language therapy.

Language disorders are called aphasia. With aphasia training and treatment, what we’re kind of learning through research is that the most functional communication that we can do with our patients is actually helping them the most. With aphasia treatment, we do a lot of training of the caregivers to help them help their significant others communicate. When helping with a receptive language disorder, we can give them strategies such as giving them multiple ways of getting the message in, such as written or verbal gestures to see if that can help. Also, it’s kind of like any other therapy where if we train hard enough your brain will refigure out a pathway to get to that injured area. We want them to be able to communicate in a natural environment, so we’ll do role playing pretending we’re at the Cardinals game or trying to order food at a restaurant and what would you say and how would you say it.

What role does self-esteem play in language therapy?

Self-esteem is a huge component I’ve realized. Once patients start feeling better about themselves in their speech they start doing better and sometimes with aphasia and disorders especially if they come to me long after their stroke, if I can make them feel better about how they sound or how they communicate, they often feel and understand and want to go out, communicate more, and be more social even if their actual deficit hasn’t changed that much. 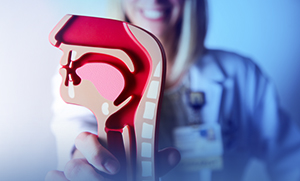 Learn about how Heather Lazarides’ rare board certification can benefit you.
Search The Memorial Network
COVID-19 Information