BJC Medical Group of Illinois hand surgeon, Dr. Timothy LeeBurton, explains what carpal tunnel is and how it can be treated.

What is carpal tunnel?

Carpal tunnel is where the median nerve is being compressed as it goes through the wrist. That median nerve is surrounded by a bunch of tendons that go to your hand. Those tendons, if they get tendonitis or swelling around the tendon, they’re in this confined tunnel, the carpal tunnel, where the nerve is.

Who can get carpal tunnel?

Years ago, it was thought that carpal tunnel would only happen in people with repetitive maneuvers, or somebody who typed for a living,but what we learn now is anybody can get carpal tunnel because we all use our wrists and hands for daily activities.

What are the symptoms of carpal tunnel?

The biggest symptoms are pain, numbness, and tingling. They can have pain that keeps them up at night. They can also get weakness, and that’s an important one. The nerves tell the muscles what to do in the hand. Weakness usually signifies that the compression of the nerve has been going on so long that the muscles are now being affected. That usually gives us an idea of the longevity of the problem. Once muscles start to be affected, usually we have to talk about surgical options.

What treatment options are available for carpal tunnel?

I use a lot of bracing for carpal tunnel because I think that that can be beneficial. Some people just wear it at night for a period of time to allow things to be better during the day. Over-the-counter medications can be helpful. Cortisone injections are an option. But once someone has failed those things and their quality of life is going down, then surgery is a great option for carpal tunnel.

What does carpal tunnel surgery involve?

Surgery entails an outpatient procedure. You have a small incision at your wrist. The compression on the nerve is relieved immediately, but the nerve may need to have a little more time to recover from the constant compression that’s been going on for however long. The carpal tunnel is made up by bones in the wrist, and then there’s a ligament that goes over the top of these bones creating a tunnel, a confined space. The tendons and the nerve are in that space. Carpal tunnel surgery entails opening the ligament to allow there to be more space available for not only the nerve, but also the tendons. People get back to doing everything they did before they had carpal tunnel surgery. That ligament that is incised or transected. It was needed as infant in in utero to help those carpal bones obtain a certain shape. As we mature and as we become adults for sure, that ligament isn’t needed to maintain that same shape anymore. That ligament is not involved with movement of the wrist or the fingers. 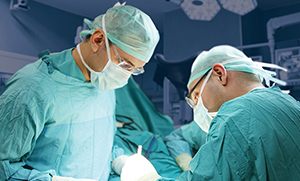 Our hand surgeons diagnose and treat conditions of the hand, wrist, and forearm.
Search The Memorial Network
COVID-19 Information